Girls officially welcomed into Boy Scouts in February of 2019

Girls will officially be welcomed into the ranks of Boy Scouts of America in February of 2019. If you've been watching the news or following social media on the topic, you'll know that there has been much controversy surrounding this announcement from BSA.  In this article, I hope to cut through a lot of the drama, open a few eyes to the facts, and sprinkle a little of my opinion on top. There you have it, a BSA sundae complete with whipped cream, a handful of nuts, and a cherry on top.  All the usual fixings!

I wonder if the people waving the banner saying, "Girls are going to ruin Boy Scouts of America", realize that girls have been, for quite some time, a part of other BSA programs like Venturing, Sea Scouts, Explorers, Learning for Life, and career-based programs.  Clearly, girls have not ruined any of these other BSA programs with their participation.  In fact, female volunteers have played a large role in Boy Scout Troop leadership since 1988. Coming from a male-led Scout Troop 32 in Warsaw New York, 1982 - 1988, I can bare witness  that 30 years of female leadership has had no negative impact on the scouting experience that my 13 year old son is a part of today.

Some other arguments you might find in social media are focused on statements  like, "The benefit of the single-gender environment has been well-documented by educators, scholars, other girl- and youth-serving organizations, and Girl Scouts and their families."  This is a seemingly strong and much repeated argument for BSA to reconsider allowing girls to join Boy Scouting.  I have to admit, the thought of myself being a 16 year old boy sitting next to a 16 year old girl at a troop meeting back in 1986 is rather appealing to me.  Alas, this still won't be seen, even in light of the February 2019 changes.  Yes, girls are allowed into Boy Scouts (newly dubbed "Scouts BSA"), but Scout Troops will still be organized in a single-gender model.  Meaning, existing Boy Scout Troops will not see any girls joining their ranks.  Girls joining Scouts BSA will have their own girl-only troops, following the same guidelines as the boys in parallel boy-only troops.

Some of you may have seen the letter to BSA that Kathy Hopinkah Hannan, National President, Girl Scouts of the USA wrote, "I formally request that your organization stay focused on serving the 90 percent of American boys not currently participating in Boy Scouts..." This is a business statement between organizations.  It is not a family statement and should not bare any weight in a family's decision to participate in either Girl Scouts or BSA.  When any additional option that is favorable to even a small set of participants is introduced,  there will always be attrition in existing organizations as a portion of current and new membership gravitates to the new option.  If Girl Scouting remains static and does nothing,  BSA opening Cub Scouting in 2018, and Boy Scouting in 2019, to girls will have a negative impact on Girl Scout numbers and growth.  This is simple business logic.  I fully encourage Girl Scouts of the USA to reevaluate their current programs, offerings, and activities to introduce new options that will attract new participants.  I'd be very surprised if they weren't already doing so.  Being a century old establishment means little when your offerings are no longer in line with the needs of your participants.  I also find it hard to believe that any century old organization, like Girl Scouts of the USA, that limits its participants to females, wouldn't have long ago realized the risks if their business model had dependencies on a competing organization continuing male-only participation in the last two of its programs that have not already opened their doors to females.

A young girl, Sydney Ireland, 16 years old when she petitioned BSA wrote, "I am determined to be an Eagle Scout. It isn’t just a hobby, it’s access to some of the best leadership training there is... Unfortunately for me and half the country’s population, we are excluded from most of these amazing opportunities for no reason other than that we are female. That’s why I’m calling on the BSA to end the discriminatory ban against young women and girls, and allow all children to participate in the Boy Scouts and earn the Eagle Rank."  There is much truth in this. BSA is world renowned for its leadership training which historically has only been accessible to young men.  In my path to Eagle Scout over 30 years ago, it seemed common knowledge that achieving the prestigious rank of Eagle Scout would not only instill me with leadership skills and experience well beyond what most kids were picking up while pursuing other common hobbies and activities, but additionally give me a distinct advantage in applications to colleges, universities, military academies, and in job interviews. To me, a resume with Eagle Scout on it speaks to a certain level of leadership, responsibility, and personal commitment at an early age that is a rare find among our countries youth. These are very desirable qualities in candidates being interviewed by recruiters and hiring managers.  If I had a daughter, I would want the same opportunities, experiences, and benefits imparted by becoming an Eagle Scout that I enjoyed in my youth available to her.

If nothing you've read yet has swayed your opinion, then let's get real for a moment and focus on what really matters.  Family matters!  Your spouse, your son, and your daughter are all members of your family.  Scouting is a family activity.  Since 1988, Boy Scout troops have been comprised of both male and female adult leadership and boys from the ages of 11 to 17.  For the last 30 years, daughters from 11 to 17 have been excluded from this family activity.  In this day and age, where women have long sense proven their equality in leadership, intelligence, and drive for success, I don't think any parent would argue if I said that daughters are family too, and deserve access to the same BSA leadership training, experiences, and career advantages that the rank of Eagle Scout has bestowed to their male siblings for over a hundred years.  All I can say is, it's about time! 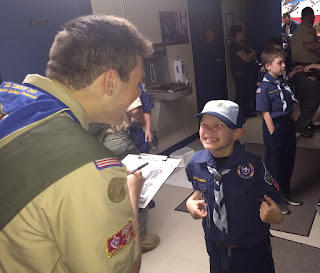 On Tuesday, November 13th, my troop, 366, went to Pack 166’s meeting and examined their uniform. I would like to congratulate the 30-40 Cubs and Webelos scouts on their uniforms. I have never seen such sharp looking group of young men before. I was truly honored to be apart of this event. 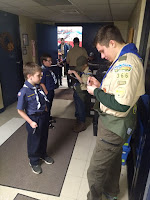 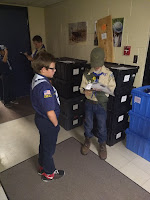 Posted by Unknown at 7:17 PM No comments: 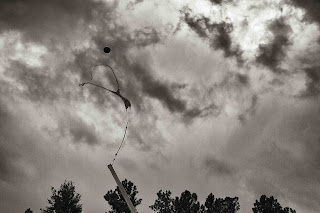 My experience with the pumpkin launching was fun, we got to make and boil homemade donuts, launch pumpkins, play some games, and learn about first aid, hiking, and pitching a tent!

The pumpkin chuckin was wonderful. there were pumpkins that launched 60 feet away, some that went strait up, and some wacky throws. The doughnuts were deep fried in a pot of boiling oil and it tasted great!


When we were learning with new scouts we first talked about orienteering and how to work a compass we walked to three hidden markers and then walked back. Second after we ate doughnuts, we did first aid and what we should do in case of a snakebite, sprained ankle, and showed how to treat it. Third we were going to show how to pitch a tent but we didn't have enough time so we all went home.
Nicholas S.
Troop 366
Historian

Posted by Unknown at 6:59 PM No comments:

A year ago when I walked into the St. Clare room at St. Francis Parish with my son for his 1st Scout meeting, my 1st re-immersion into Scouting since 1988, I wasn't sure what to expect. I was away for 30 years.Was it still the same Scouting organization I grew up with or had it changed? St. Francis being our chosen church and community, we stepped in and joined the ranks hoping for the best.

Over the past year, many have followed suit. Today Troop 366 has flourished with new Scouts, older transfer Scouts, and Adult Leaders joining the ranks!  The influx of Adult Leaders and Scouts has boosted activities, training, rank advancement, attention to the needs of individual Scouts and more.

As a new adult leader looking for ways to contribute, I'm very happy to introduce a new modern website with integrated calendar, journal, maps, activities spreadsheets and more. The new site is going live December 3rd, 2018, at our Court of Honor and Holiday Potluck. As a bonus, a new Scout that transferred in from California has expressed interest in helping and has become the new Assistant Webmaster. I'm very excited to see where this will lead!

I'm proud to say that my son and I are members of Troop 366 and the future is looking brighter than ever!  I look forward to many more years with Troop 366 as we step into the future of Scouting together.

Yours in Scouting,
Gene S.
Troop 366
Committee Member/Treasurer/Webmaster
Posted by Unknown at 4:49 PM No comments: